This is the third in a series of articles describing a simplified example of near real-time Ad Campaign reporting on a fixed set of campaign dimensions usually displayed for analysis in a user interface. The solution presented in this series relies on Kafka, Aerospike’s edge-to-core data pipeline technology, and Apollo GraphQL

Summary of Part 1 and Part 2

Part 3 has two use cases:

As mentioned in Part 2, the KPIs, in this example, are very simple counters, but the same techniques could be applied to more sophisticated measurements such as histograms, moving averages and trends.

The first use case reads the Campaign details, including the KPIs from Aerospike record.

The second use case is based on a GraphQL subscription specific to a Campaign and KPI. A subscription message with the new KPI value is sent from the campaign-service to the campaign-ui when the KPI has changed.

The Core Aerospike cluster is configured to prioritise consistency over availability to ensure that numbers are accurate and consistent.

This sequence diagram shows the use cases: 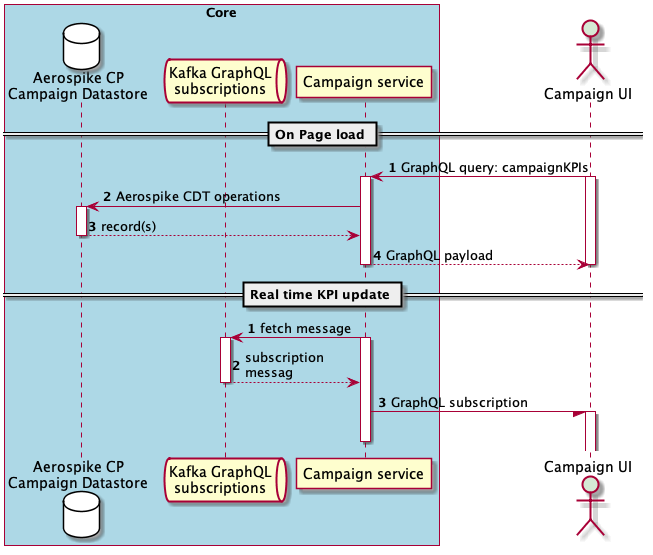 The companion code is in GitHub. The complete solution is in the master branch. The code for this article is in the ‘part-3’ branch.

Javascript and Node.js are used in each back-end services, although the same solution is possible in any language.

The solution consists of:

Docker and Docker Compose simplify the setup to allow you to focus on the Aerospike specific code and configuration.

What you need for the setup

All the prerequisites are described in Part 1.

To set up the solution, follow these steps. The Docker images are built by downloading resources, be aware that the time to download and build the software depends on your internet bandwidth and your computer.

Step 2. Then run the following command to delete the Aerospike data and the Kafka topics data.

Once up and running, after the services have stabilised, you will see the output in the console similar to this:

to display the Campaign application.

Note: you are now running 12 services on your local machine.

How do the components interact? 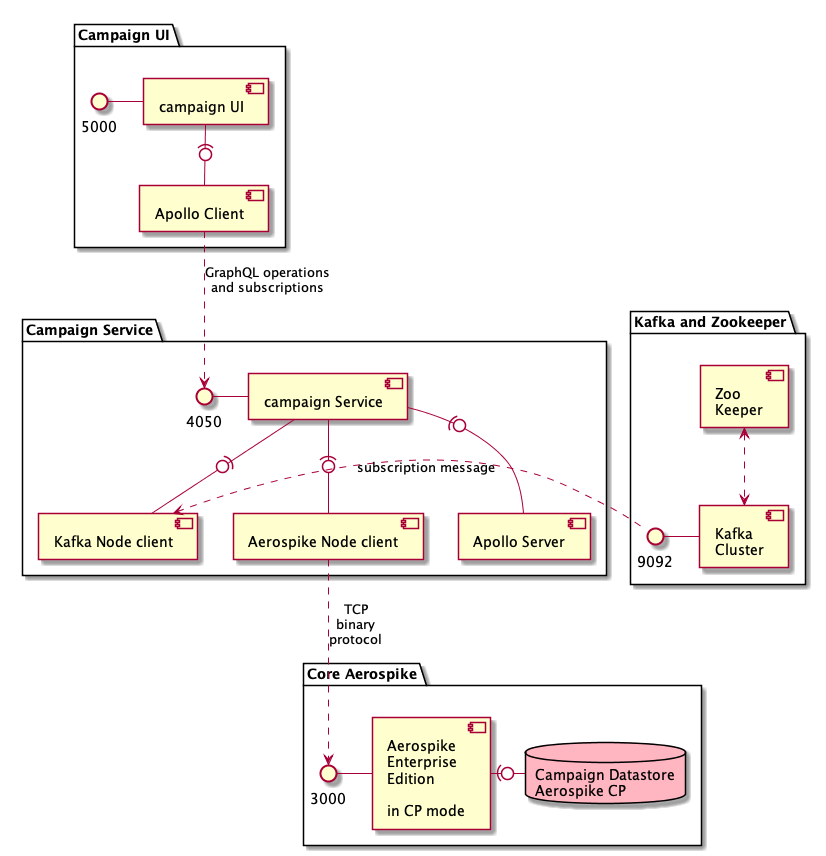 Docker Compose orchestrates the creation of twelve services in separate containers: All of the services and containers of Part 1 and Part 2 with the addition of: Campaign Service campaign-service – A node.js and Apollo GraphQL Server service Like the services in Part 1 and Part 2, the campaign-service uses the Aerospike Node.js client. On the first build, all the service containers that use Aerospike will download and compile the supporting C library. As mentioned in Part 1 and Part 2, the Dockerfile for each container uses multi-stage builds to minimise the number of times the C library is compiled. Campaign UI campaign-ui – A React and Material UI single-page web application to display Campaign KPIs, it uses the Apollo Client React GraphQL client.

How is the solution deployed?

Each container is deployed using docker-compose on your local machine. Note: The campaign-service and campaign-ui containers are deployed along with all the containers from Part 1 and Part 2.

How does the solution work?

The campaign-service is a deliberately simple Apollo Server providing a GraphQL schema and the resolvers for the root operations defined in that schema.

Note: this is an example server only and is not structured for production.

The schema defines the types of:

Each field in GraphQL can have a resolver function defined to resolve the value of the field.

In this schema we have defined resolvers for:

Query resolver function names match the field names of campaign and campaigns and they delegate to the campaign data source CampaignDataSource.js.

The single Subscription resolver kpiUpdate implements a filter allowing the front end to subscribe to a KPI for a specific campaign and KPI name.

It is a surprisingly small amount of code to implement a GraphQL Schema and Server.

src/CampaignDataSource.js is the connector to Aerospike, whose job is to read aerospike Campaign records and transform them into the type described in the GraphQL schema.

Fetching a single record by ID

Fetching a single campaign is implemented using the Aerospike get operation. The whole Aerospike record is read using the primary key and transformed into the GraphQL type (see Transforming a record to a Campaign).

This function is not actually used in the solution, but it does illustrate how to use Aerospike’s query capability based on a secondary index and filters.

Transforming a record to a Campaign

A Campaign record is stored in a set of Bins, and these are transformed to the GraphQL types.

The function takes the Aerospike record and returns a Campaign type:

The KpiReceiver listens to the Kafka topic subscription-events and when a message is received, it is published as a GraphQL subscription. Using Kafka as the pub-sub technology allows the campaign-service to scale without the KPI event being lost.

Most of the work is done in this code:

Note: pubsub (line 4) as part of the apollo-server npm package and does all the heavy lifting in implementing GraphQL subscriptions. The pubsub reference is passed into the constructor:

The application is implemented by composing the Components:

Setting up a React application to use Apollo GraphQL is quite straight forward by following this guide.

In our code, we will use GraphQL Subscriptions implemented with websockets and Apollo provides all the helper classes and functions to achieve this.

First, we create a link to our GraphQL server:

then we create a web socket link:

We can optimise the communications paths to the server by splitting the link based on the operation type.

We also add a client-side cache — not necessary in this example, but fun to add anyway.

Finally, we create an ApolloClient instance.

ApolloProvider is a HOC from Apollo that encapsulates the App component and passes down the ApolloClient instance as a property and is available to child components of App.

The React application component is ready to interact with the campaign-service.

CampaignList.js is a table using Material-UI components. An array of campaign Ids is passed in props. These Ids are use in the GraphQL query:

The render() method creates a TableContainer with a TableHeader, each row in the table is CampaignRow component.

The CamaignRow component receives the “campaign” via props. Each KPI column is implemented using the Kpi component.

The component is rendered by including the GraphQL subscription to listen for KPI updates.

In order to highlight the change in a KPI value, the new value is turned red for about 1 second.

In this series, we have used Aerospike and Kafka to build a simple edge-to-core solution to capture real-time ad events for Campaign Reporting. 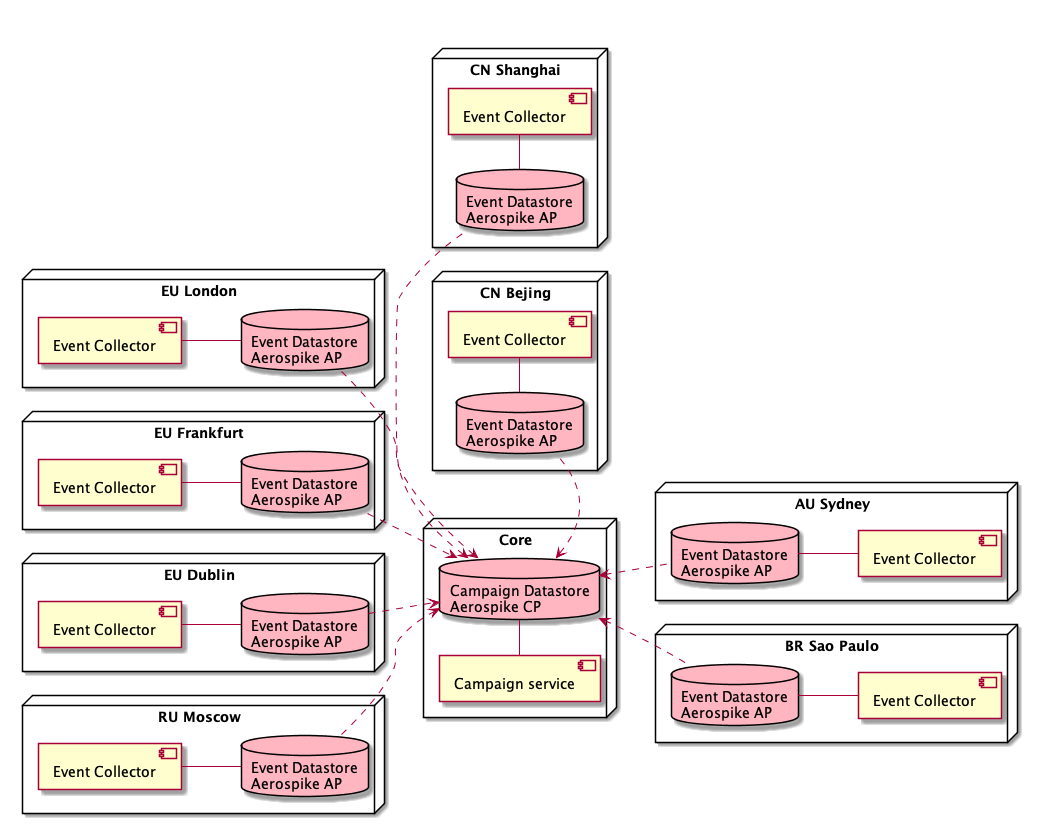 Geographical deployment of “edge” and “core”

Users interact with ads on Publisher websites and the interaction events are sent to the local “edge” event collector and datastore.

Event data is propagated to the “core” aggregator/reducer using Kafka. The aggregator/reducer takes each event and aggregates it with the designated KPI, in this example, the KPIs are simple atomic counters stored in an Aerospike CDT. 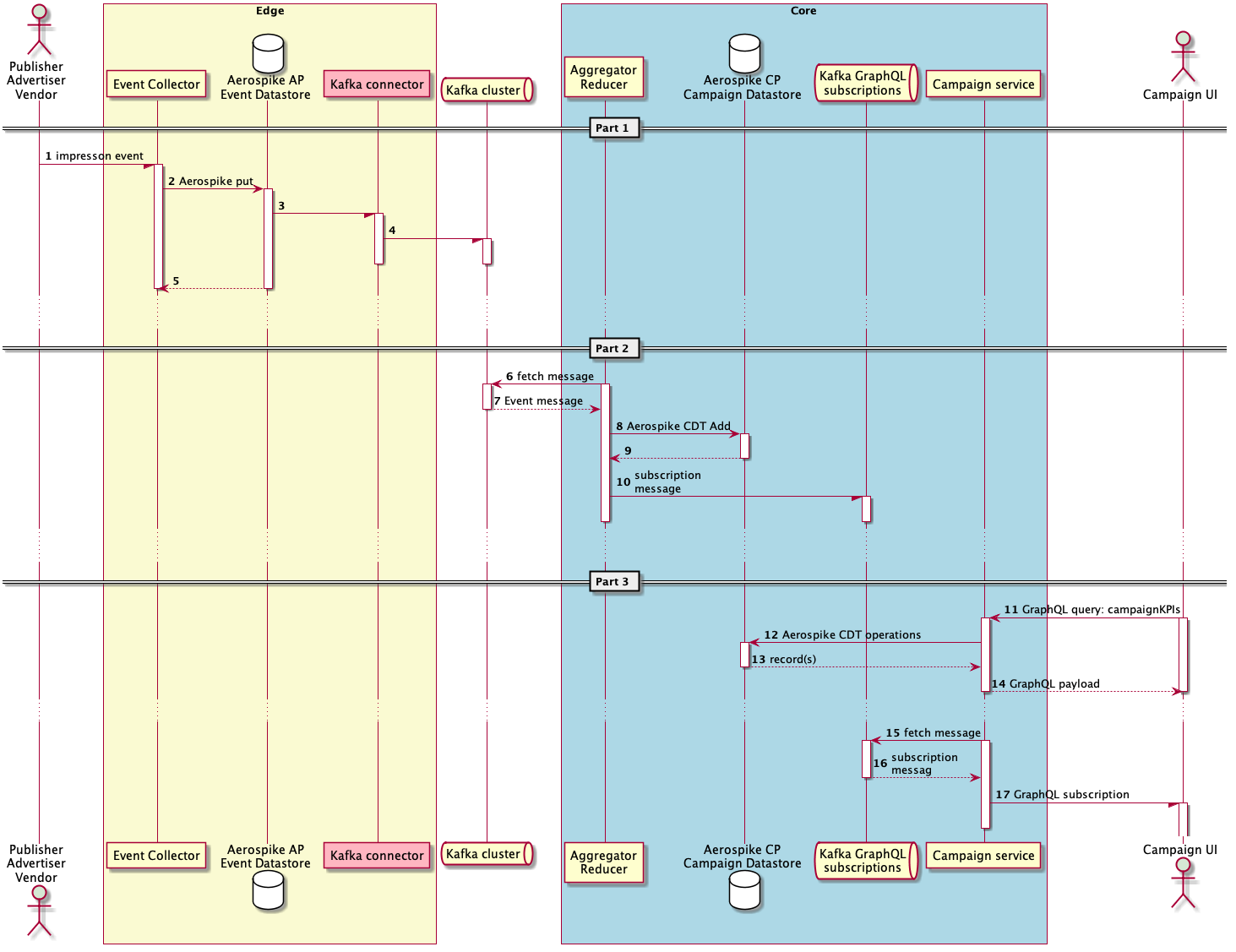 The complete component diagram shows all the components, their packages and their interaction with each other. The packages are dockerized for deployment, vastly reducing the risk of production failures due to a missing dependency. We have used docker-compose in this example; in a real-world environment, Kubernetes is a great choice for container orchestration.

Part 1 of this series describes:

Part 2 describes the aggregation and reduction of Ad events into Campaign KPIs using Kafka as the messaging system and Aerospike as the consistent data store.

Part 3 (this article) describes the Campaign service and Campaign UI for a user to view the Campaign KPIs in near real-time.

Possible improvements to the entire application

The KPI data structure (cube) and event aggregation are deliberately simple to illustrate the technologies used. Here are a few improvement ideas:

This article, the code samples, and the example solution are entirely my own work and they are not endorsed by Aerospike, Confluent or Apollo. The code is PoC quality only and it is not production strength and is available to anyone under the MIT License.

Peter has over 30 years experience in the IT industry. He currently serves as the Technology Architect at Adform, based in Copenhagen, where he actively is involved architecting and migrating technologies and work practices to a scalable enterprise platform. Before Adform, he was the Director of Application Engineering at Aerospike Inc, where he evangelized Aerospike in 21 countries. Prior to Aerospike, Peter was co-founder and CTO at ITerative Consulting, a consulting company providing software modernization to clients in 11 countries. Prior to ITerative, Peter ran the consulting and education divisions of Forte Software (Australia), a provider of enterprise software development, deployment and management tools.