What Is an Aerospike Anyway? 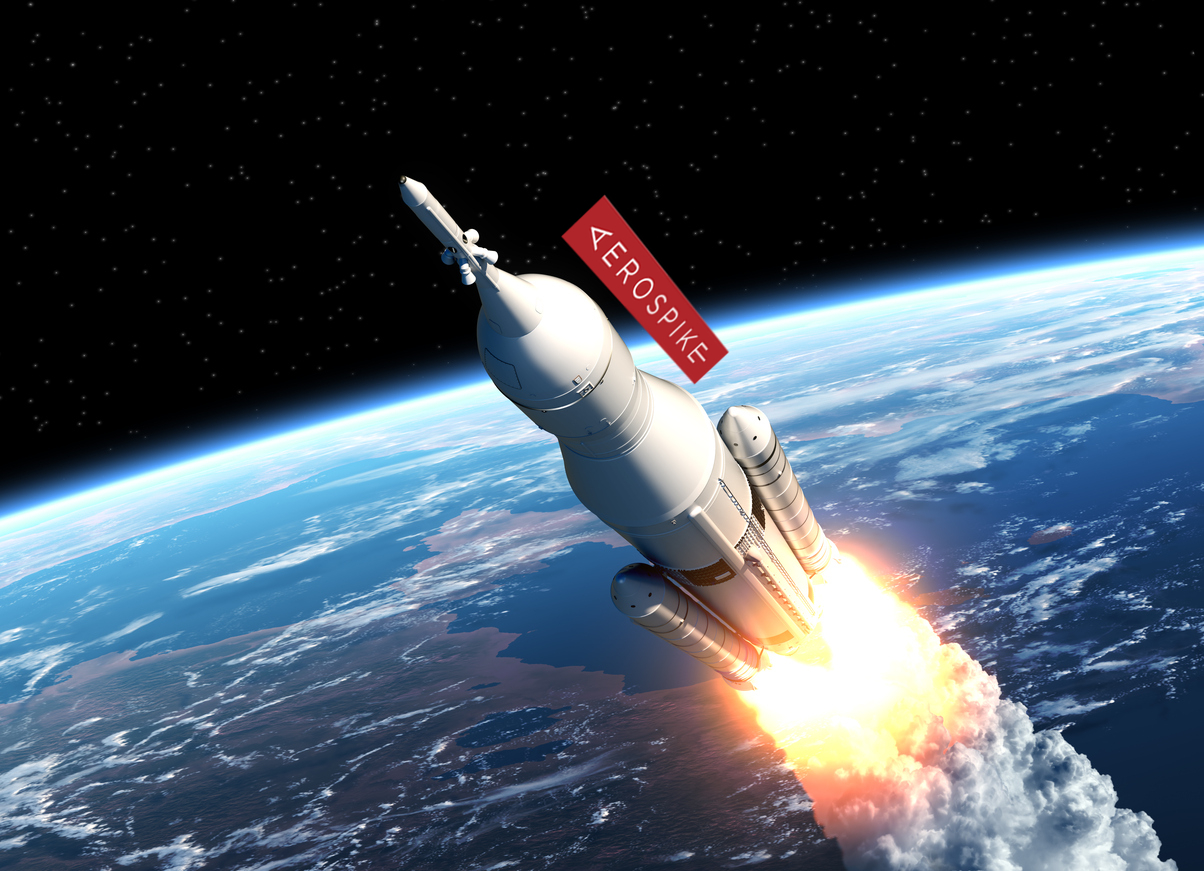 Our company has a cool and interesting name so I thought I’d use this post to explain what an aerospike is, and why it’s such a fitting name for our database and company.

In the aeronautical world, an aerospike can refer to one of two rocket components – both of which have rich meaning for our database.

The first component, the drag-reducing aerospike, was a thin, antenna-like structure mounted on the nose cone of a rocket. This aerospike – picture an upside down martini glass stuck on the rocket’s nose – increased the rocket’s range at supersonic speeds by reducing drag. The aerospike allowed the projectile to go faster and further, carry a larger payload, and achieve greater stability. Sounds a lot like the Aerospike database.

The second component, the aerospike engine, is a type of rocket engine that maintains its aerodynamic efficiency across a wide range of altitudes. It uses much less fuel at low altitudes, where most missions have the greatest need for thrust. Unlike a traditional engine, this engine adjusts to changing air pressure as the rocket ascends. It never needs to be jettisoned, meaning there is only one rocket stage required. The aerospike engines being developed today are lighter weight and reusable, which makes them much more cost effective for space tech companies such as SpaceX to deploy.

I like to use the acronym R.I.C.H. to illustrate what differentiates the Aerospike database. R.I.C.H. also brings to mind several parallels to the aerospike engine:

Real-time engine optimization. Through a series of altitude-compensating nozzles, the aerospike rocket engine is continually adjusting so that it can perform optimally and maintain efficiency, regardless of altitude. Similarly, as the Aerospike database workload varies, it is optimized in real-time to sustain performance and stability. Workload is distributed automatically to all available nodes in a cluster. For example, if a server becomes unavailable (due to network, hardware, other infrastructure issue), Aerospike detects that node is now offline and redistributes the workload to remaining nodes. All this happens in real-time, and cross data centers including cloud without you having to do anything.

Intelligent (database aware) clients. Just like the aerospike rocket engine maintains its aerodynamic efficiency with changing altitude, Aerospike Smart ClientTM make applications maintain their stability with changing conditions. The Smart ClientTM is built into Aerospike client drivers and development libraries, and available a variety of programming languages. This brings applications built-in capabilities such as cluster-status sensing, efficient transaction routing and network connection pooling, and failover protection. With Aerospike, there is no need for sharding or for load balancers, which makes development teams very happy.

Cluster that is self-healing. Redundant systems allow the aerospike rocket engine to operate reliably even when one system malfunctions. Similarly, Aerospike database is highly available.  If one or more servers within a cluster go out, the overall system keeps going – DevOps teams love Aerospike’s predictable performace and reliability. Self-healing clusters also make the database easy to scale, since it is always maximizing the use of nodes.

Hybrid memory architecture.  I mentioned earlier in this post that the aerospike rocket engine is cost effective because it uses less fuel where missions have the greatest need for thrust. It also requires only one stage and can be reused from one mission to the next. The Aerospike database similarly offers a lower TCO because it can process x4 data volume with 1/5 of data center footprint compared to memory-only databases. Hybrid Memory Architecture is unique to Aerospike database, making sub-millisecond latency, over-million TPS data processing (more information here). Aerospike delivers high performance where most mission-critical applications have the most need for high data processing speed and volume, without having to add more servers, or cache like other relational or NoSQL databases must do.

When this company was founded in 2009 by database and networking industry veterans Brian Bulkowski and Srini V. Srinivasan, it was known as Citrusleaf.  In August 2012, the company and its database were rebranded as Aerospike. The name change recognized our explosive growth and transition from a startup, whose database was used by Unicorns that needed cutting edge technology, to the mainstream, where more and more companies are beginning to require high-performance transactional systems. Today, Aerospike is used in enterprise-grade, mission critical engagement applications across industries including telco, finance, retail, media, and manufacturing.

Along with the name change came a new logo. In some ways, the red and white Aerospike logo reminds me of the FedEx logo, with its hidden arrow in the ‘e’ and ‘x’. When you look closely, you can see the Aerospike logo looks like a rocket in flight. The sideways ‘A’ is the nose of the rocket, and the sideways ‘E,’ with its longer middle stroke, is thrusting the rocket forward.

Now you know everything there is to know about our company name and cool logo – and even more about the benefits of the Aerospike transactional analytics database for mainstream, enterprise-level engagement applications.