Aerospike and Intel – proving the next generation of in-memory performance

As expected, transistor counts are going up. Database parallelism is the need of the day.

These three technologies, from Intel, have arrived, delivering the next generation of in-memory performance.

Aerospike couldn’t be happier. As a database predicated on the coming generations of in-memory technology, we expected that RAM will get faster and lower power, Flash will get denser and higher throughput, and CPUs will have more cores.

The numbers are impressive. 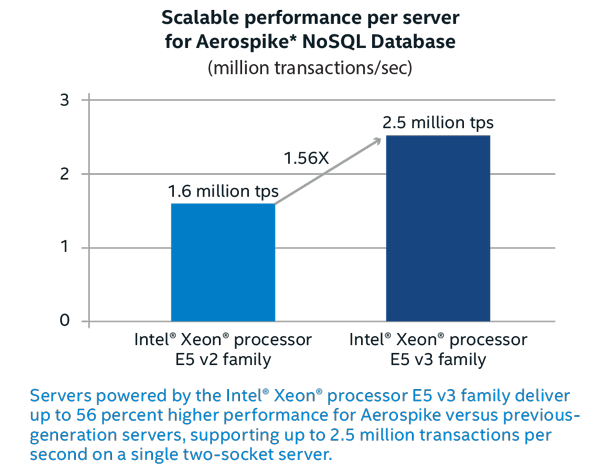 Our previous case study with Intel showed a Flash-based deployment that is now achieving 200K database transactions per server in Flash. This deployment powers AppNexus, New York’s highest flying internet startup. While we’re not ready to release our new numbers for the new P3700 device, we’re going to blow away all the old numbers.

As a developer or architect, you’ll see this performance arrive with cheaper cloud prices, where virtual machines are cheaper than ever, with more virtual CPUs. Snapping in new instances – virtual machine based or container based – gives you amazing parallel performance without operational downtime.

Aerospike – now open source – is a database you can simply download and start using.